Title : Single-scattering theory of light diffraction by a circular subwavelength aperture in a finitely conducting screen

It has been released in the February edition of the journal of the optical society of JOSA A, vol. 24, pp. 339-358 (2007). Click here to read the abstract and download the paper (subscribers only).

This theoretical paper provides analytical formulas for the electromagnetic field diffracted by a subwavelength aperture in an opaque screen (metallic or dielectric). My contribution to these findings is very small, my name was put on the paper mostly because of the ongoing collaboration between the theoretical and experimental groups at the Fresnel Institute.

In my opinion, the main application concerns the far-field directivity from a nanoaperture (part 6, figures 8 to 11). The theory predicts a directivity of the radiation pattern that increases for small permittivities. Surprisingly, this holds for metals AND dielectrics, thus independently of surface plasmon excitation.
Lire la suite

Aaaarrrrgggghhhhh…. I finally submitted that doomed paper to this high-impact factor physics journal. Took me a too long time to write it down, and to get it into the limited article length :o((

We resolve the photokinetic rates enhancement of Rhodamine 6G molecules in single nanometric apertures milled in an opaque aluminum film. Combining fluorescence correlation spectroscopy and lifetime measurements, we detail the relative influence of excitation, radiative and non-radiative decay on the emission process, and describe the physics underneath the overall 15 fold fluorescence enhancement. This procedure is broadly adaptable to a wide range of nanostructures. 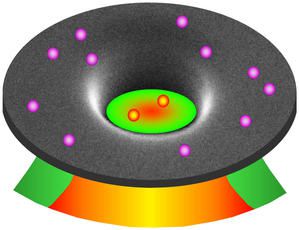 Comments on fluorescence cross-correlation spectroscopy in a nanoaperture

A point that is always missed by readers of peer-reviewed articles is the discussion with referees, which I believe often contains interesting comments and should somehow be available to the scientific community. To (locally) correct for this, I give here the reviewers’ remarks concerning our latest Optics Express publication on FCCS.

“[…] The  experiments are carefully done, the analysis seems correct, the FCS and FCCS experiments are internally consistent  and the results are very convincing. […] This is a straightforward next step of earlier work of the group of Wenger,  using nano apertures, which looks very promising and widens the path for the use of FCCS. “

“[…] It is an important work on the field of fluorescence microscopy and is worth publishing in Optics Express. Unfortunately, the manuscript is not written in a well manner. […] If it wasn't for this important topic and the in principle well-done experimental work, I would not recommend this work for publication.”

I obviously do not share his global opinion ! Reviewer #2 then wrote a list of 20 points, which I cannot detail here. Fortunately, my answers and corrections were convincing. I give here a selection of the main discussion :

Q: “How is the influence of the nanoholes on the performance of biological assays in general? Usually, biological and chemical reactions are influenced by a mechanically confined sample volume.”

A: Actually, we don’t know much about this issue, which is well beyond the scope of this paper. We can only say that we never detected any effect of the aperture on the reactions we tested. A nice point with Al is the aluminum oxide layer that forms naturally on top of the film and passivates the surface. Thus we have no reason to think that the aperture has a large influence on the biochemical reactions. A challenging question is to determine by how much the nanoaperture itself affects the molecular diffusion. We are aware of some work preformed by Harold Craighead’s group (Samiee et al, Biophys. J. 88, 2145), but this reference assumes a 1D diffusion. If this seems valid for a 50nm diameter aperture, we question the fact that it still holds for a 340nm diameter hole, which is obviously more complex. We use the general FCS formula for a 3D Brownian diffusion, while letting the aspect ratio s vary freely. The numerical fits converge easily, and remarkably account for the experimental data.

Our latest publication has now been released :

Nanoapertures have already been demonstrated to be useful for single-color FCS analysis [see Levene et al, Science 299, 682-686 (2003)]. Surprisingly, the extension to the dual-color case has never been reported and yet new interesting specificities are described and detailed in this article (simple microscope setup, no confocal pinhole, micromolar concentrations).

As we paid a substantial fee of $1200, this paper is freely available to ALL readers at :
http://www.opticsexpress.org/abstract.cfm?id=119765 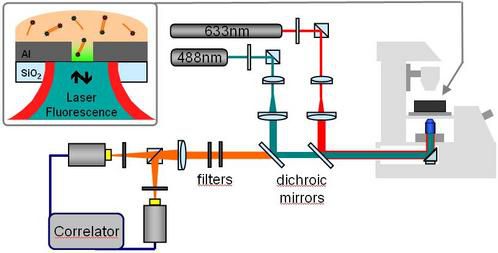 My present research is focused on the implementation of nanometric structures to enhance the contrasts (fluorescence, Raman) in optical microscopy. Two goals are aimed:

1-       Fundamental Nanophotonics : understand the influence of nanometric structures on the optical emission.

I’m presently studying the implementation of single apertures milled in an opaque metallic film. These apertures have dimensions below the optical wavelength (range 100-500 nanometers, which is 100 times smaller than a hair diameter).

2-       The fluorescence brightness can be enhanced up to 15 fold : we collect 15 times more photons per single molecule inside the aperture (as compared to a conventional solution).